And now, back to our regularly scheduled programming…

First off, an apology. While I fully intended to post updates for June and July, life intervened, and I wound up taking the summer off. As it turns out, I really needed a vacation.

While this does mean my production schedule for the rest of the year has been pushed back by two months, it was time well-spent. In addition to spending two weeks in Hawaii (don’t hate), I gardened, spent time with my family, and all-around just reconnected with how to be a happy, healthy human being.

I also spent a great deal of time reflecting on my writing career over the past couple of years: what has been consistent, what has changed (especially since I published A World Apart), what has worked, and what needs to change in the future so I can keep doing what I love and bringing you books you’ll enjoy.

For those of you still waiting for the next installment of Emil and Puzzle’s story, thank you! Your continued support and excitement means everything. I expect to have Thicker Than Water in your hot little hands by no later than the end of September.

After that, it’s on to Asher and Grace’s book, If You Were My Vampire. I don’t have any dates yet, but I plan on bringing it to you as quickly as is (humanly) possible. In the meantime, be sure to check in with me on Facebook, Pinterest, and this blog for exclusive content to keep your appetite primed!

Song Of The Moment

Shut Up And Swallow – Combichrist*

You’ll get nothing for free
Don’t try to suck it off me
You always take you what you want
Now I just take what is mine
I’ll give you abstinence
You tell of life..
It’s up to you to fill it with substance

I’ll play your game
A lesson of life: It’s not what you want, but what you get
You’ll feel it from within as I work my way out
Such a pretty girl, but such a dirty mouth

“Where are you?”
“You could call it the end of the world.”

While on vacation in Hawaii (I’m not trying to rub it in, really!), I had the happy fortune of discovering a really fun cozy mystery series. I found Murder Frames The Scene on a Local Author table at a used bookstore on Maui, and after devouring it in less than a week, I immediately ordered the first two books in the series from Amazon.

If you’re looking for danger, charm, and a window into 1930s Honolulu, I highly recommend this trilogy! 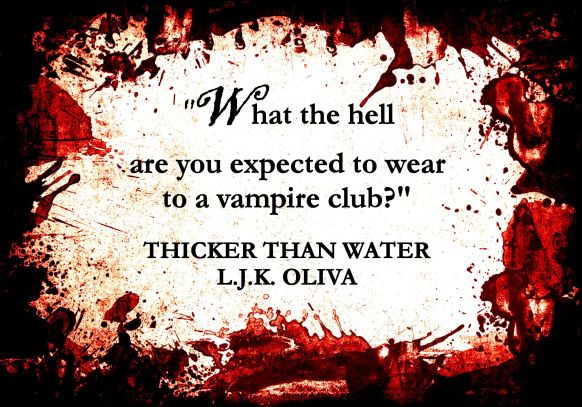 “Emil told me about your little encounter this afternoon.”

Misha’s next breath lodged in his chest. “Did he, now.” He sneaked a glance at Emil’s face. Surely he hadn’t told Kidwell about Kelly, had he? Govno, he’d promised…

“It’s a good thing no one was at the Byrd house. Things could have gotten complicated.”

Kidwell rose to his feet. “Emil described the Son, and I think I know who he is. He goes by the name Boudreaux. He is—was—one of the original Acadians who settled here. Been in Louisiana since the late 1760s.”

Misha swallowed a groan. “Great. How do we find him?”

“Glad you asked.” Kidwell gave him a smug look. I’ve managed to secure us invites to a, well, exclusive club this evening. As it happens, it’s one of Boudreaux’s favorite feeding grounds.”

Misha forced himself not to tense. He’d heard stories about the kinds of clubs Sons operated. Sweat pricked the back of his neck. “Invites. Let me guess, you just called them up and asked?”

Emil stood too, a reproachful look on his face. “Puzzle…”

Kidwell merely shrugged. “I’ve managed to make some connections during my time here. As long as we abide by the rules and the dress code, we won’t have a problem.”

“Dress code.” Misha bit back a snort. “What the hell are you expected to wear to a vampire club?”

Kidwell’s gaze slid to Emil. His answering grin bordered on predatory. “As little as possible.”

Want to stay in the loop? Sign up for my newsletter here, and I’ll email you when the book drops. In the meantime, add Thicker Than Water to your Goodreads TBR list!

Thanks again for reading!  Look for my next update at the end of September.  Stay crazy!