Originally posted on Writing In The Night (December 11, 2013)

“Ogling ruins is a way of meditating on our own inevitable deaths… A humbling reminder that, yes, it all does return to dust…”

There’s a lot to be said for city planning.

It started with the ancient Romans, the first civilization in history to create cities on a grid, with straight streets and geometric neighborhoods. The lack of such planning was one of the hallmarks of the Dark Ages, and its reemergence signified the return of order and peace in the Western world.

It is also highly overrated.

Need proof? I give you Warm Water Cove.

Located in the Dogpatch neighborhood of San Francisco’s Potrero Hill district, this “park” was once a favorite haunt of punks, junkies, vagrants, and other anarchist types. Vibrant graffiti blazed on the surrounding walls. People gathered along its jagged shoreline to zing golf balls into the Bay, or meditate on the extensive collection of tires half-buried in the sludge below.

It was a place devoid of planning. Untouched by city officials. Unmarred by civility. Graced with its own harsh culture and terrible beauty.

Until society decided to take it back.

Armed with a sense of civic duty, volunteers marched into the park and painted over the Graffiti Gallery. Native plants were painstakingly transplanted into the rock-hard ground. Bums were kicked out, trash removed, used hypodermic needles picked out of the chaparral.

Some called it an improvement.

And it almost worked.

Warm Water Cove is an industrial wilderness. It always will be. And like all such places, it has its own unique ecosystem. Life shouldn’t be able to exist here at all. The water is dark and oily, the soil dead and devoid of nutrients.

But life is tenacious. The so-called “native” plants are slowly being muscled out by the ugly, rangy weeds that always held pride-of-place. Broken glass shimmers from the carefully carved paths that snake around the park. The Graffiti Gallery, though still a shadow of its former glory, is being reclaimed inch-by-inch. 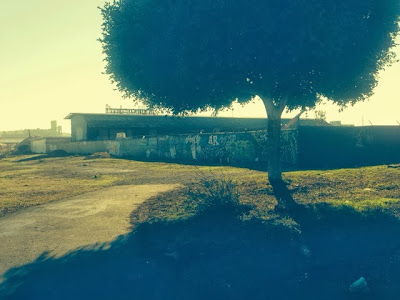 I am pleased to report the attempted gentrification of Warm Water Cove has failed, at least for now. There was one thing the city planners didn’t account for: the sheer audacity of the wild soul. But all around it, condos are springing up, and yuppie culture is taking root. Civilization encroaches.

Is this a good thing?

The human mind needs chaos, maybe even more than it needs order. We need places safeguarded from the whitewashing effect of civilization. Places where we can retreat. Take our wildness out from under our jackets, admire it for a little while. Warm Water Cove used to be such a place. There aren’t many left.

Strange though it sounds, I hope it stays dirty and cold and raucous and rank. From what I’ve seen, odds are good it just might.